Sun O'er Sea is an exhibiting cattery that is committed to Maine Coon excellence in health, temperament, and structure. We strive for a look that we feel best represents our beloved breed: beautiful expression, lovely ear set, a balanced rectangular body, square muzzle, and, of course, the plume tail that meets the cat's scapula. We love full muzzles and prominent lynx tips.

Nick and I love taking our kittens out beginning at four months, so you will often find us in Maine Coon kitten class. However, we respect and observe our kittens and cats' right to choose. If showing is not our cat's favorite pastime, we do not hesitate to stop our cat's show career at any point.

Showing, while indicating our cats' conformance and exceedance of breed standard, does not supercede our cats' happiness. Our cats come first and always. Some cats love the show hall. Some dislike the show hall. We do our best to make sure each of our cats is happy with their show career. We never pressure or force a cat into showing as that goes against everything we stand for. We are passionate, personable, and talkative. We welcome members of the public to approach us and talk about the Maine Coon cat, see our kittens and cats, and even follow us to rings.

If you have a question about show ribbons or why people clap and say "yaaay" when the brown and orange ribbons are hung, please ask us! We LOVE our Maine Coons and we LOVE talking about our breed and participating in the show atmosphere.

Not only has Cthulu had a successful show career thus far, but he truly loves the crowd! He loves being on the judging stand and doesn't mind being examined by the judges. He is the most laid back and relaxed cat and he even slides a paw over to a neighbor to play!

On May 20, 2018, our sweet Nyneve achieved her championship at the Almost Heaven Cat Club Show in Charleston, WV! Nyneve inherited her father Prince's personality, enjoying the attention. She loved to play with the judge's toys! After this show, we decided not to pursue a Grand Championship and she started her career as a breeding queen. In summer 2018, she sired her first litter with GC Maine Delite Rooster's True Grit.

Beth received a fully funded offer from the University of Tulsa to pursue her PhD in English Literature and a position on the Modern Journal Project (the MJP, funded by government grants) that necessitated a partial move of the cattery to Tulsa, OK. She also currently teaches several sections of undergraduates. While work and cattery had remained separated for the past several years (aside from some very happy visits to the classroom), this offer necessitated a decision of whether or not to relocate to a new state.

Nick decided to remain behind in Pennsylvania due to his full-time position and several other considerations, mainly aging family. Nimue and Morwenna stayed in Pennsylvania while Beth traveled to her new residency with Nyneve, Mora, and Cthulu. As some of Sun O'er Sea's cats were adjusting to the new locale, Beth decided to take a break from showing and focus on getting the cats settled at home. The two girls in PA didn't like to show; they were not forced.

This unique arrangement of two locations (which Beth was initially very apprehensive about) has enabled Sun O'er Sea to address the needs of pet parents in both states.

Sun O'er Sea plans to resume showing in late 2019, most likely in the Gulf Region.

We affectionately call Cthulu our ham! He loves the showhall and thinks every toy belongs to him. He absolutely loves saying hello to everyone both cats and people alike! This amazing big boy is just finishing his kitten class and entered Open class in September 2017 where he achieved his championship!

As he continued to grow, Stirling continued to travel around the region with Mickey. He was smaller in stature than the other boys his age, but he continued to have fun learning the show process. In November when he reached 8 months old (the minimum age required to enter Open class) Stirling, like his father, was awarded a CFA championship. 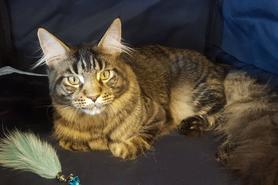 Like his sister, Stirling began his show career after just turning four months old (the minimum age) in 2018. He inherited his father Cthulu's in-your-pocket personality and his parent's lovely type. Stirling was shown by Mickey Cole of Maine Delite and Tailspark catteries. He loved to show and adored his time on the stage.  He attended every ring and never minded the other cats, unlike his sister who had inherited her mother's attitude. 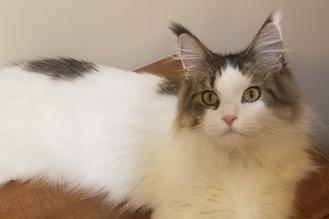 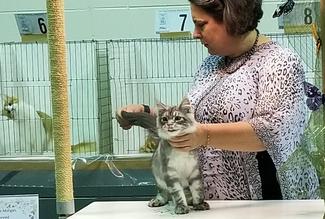 Morwenna began her show career after just turning four months old (the minimum age) in 2018. She had beautiful type but inherited her mother's personality. While she is great with people, she like Nimue was not a fan of showing. The judges adored her, but Morwenna did not approve of the limelight. She began but did not finish kitten class; we will never make one of our cats show if they do not enjoy the activity. 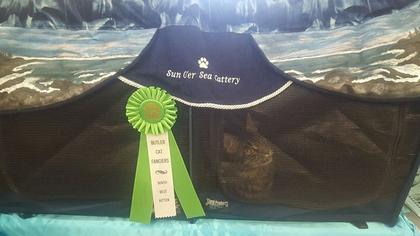 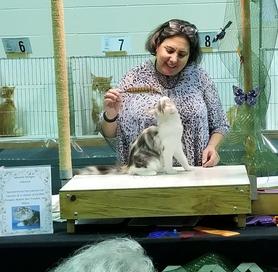 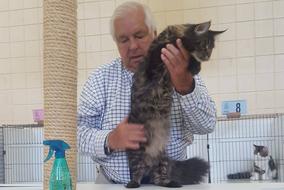 Showing in 2019: A Brief Hiatus & A Welcomed Bump in the Road 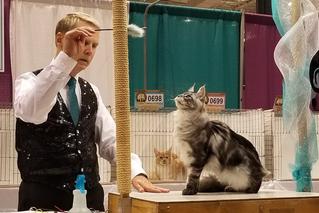